Today, Felicia Wright, CBO of Mygani Design Studio, had the privilege to be one of the panelists at the 2nd Annual Women in Business Panel (UNF). The following topics were discussed with a group of aspiring students:

As an UNF alumni it was great to go back  and see all the great things the school has to offer the students.  The school has grown tremendously,  since I was there in ????
I wish all the students continued success in their future endeavours. 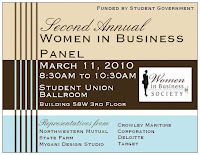 Felicia Wright is the mompreneur and branding strategist of Mygani LLC, a service-based marketing firm that helps women entrepreneurs in develop effective and engaging brands. Felicia's keen listening skills give her the ability to be a major visionary; empowering her clients to excel in life and in business!